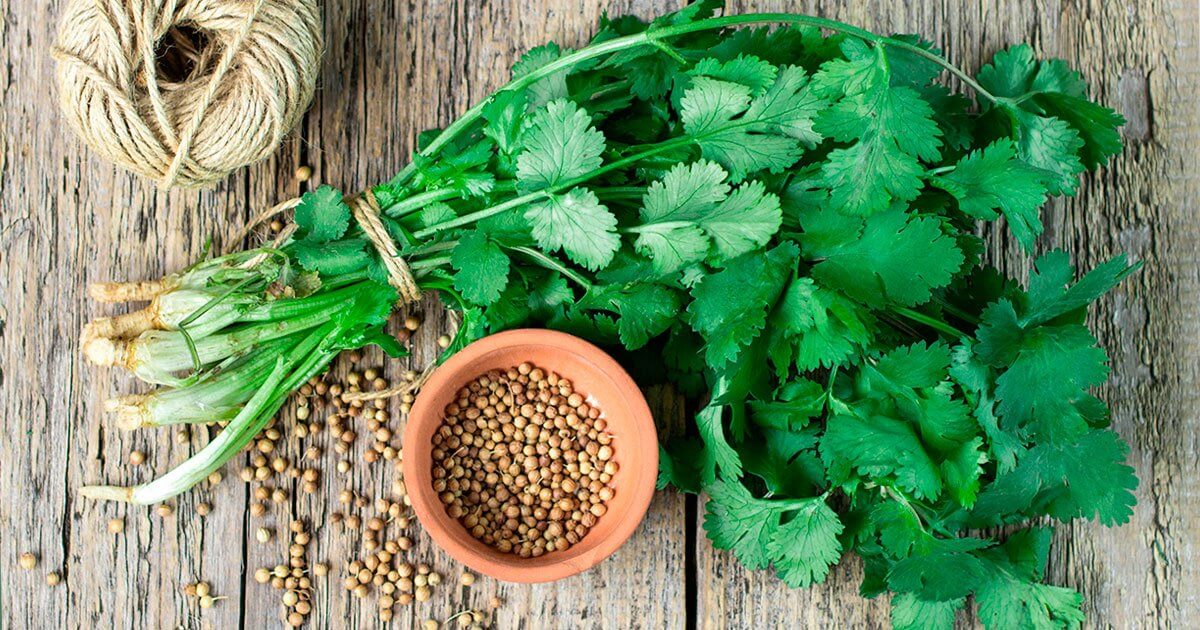 Cilantro is a popular herb due to its fresh and bright taste. But cilantro is so much more than a versatile culinary herb. Cilantro is loaded with beneficial phytochemicals, vitamins, minerals, and antioxidants.

Here are 7 of the ways cilantro goes beyond the plate to provide significant health benefits.

Although it’s not as effective as high-quality zeolite for detox, studies suggest cilantro can help rid heavy metals from your body.

This is big since most people are unknowingly exposed to heavy metals on a regular basis. Over time, these toxins can build up in your tissues where they can wreak havoc on the body.

However, some plants are considered chelators, that is they can bind to heavy metals and allow your body to excrete them. Evidence suggests that cilantro is an effective chelator (1).

One animal study, for example, found that cilantro can accelerate how quickly your body gets rid of lead (2). So, simply adding cilantro in your diet may help remove heavy metals.

In the United States alone, over 610,000 people die of heart disease every year (3). That means 1 of every 4 deaths is caused by heart disease. Those are some scary statistics.

The good news is that eating a diet rich in leafy greens can protect your heart. And cilantro is one of those foods that can give you an extra edge against oxidative damage.

Evidence suggests that the phytochemicals in cilantro could protect your heart from oxidative damage helping to keep it healthy (4).

Cilantro also shows the ability to help balance blood sugar levels, giving another good reason to add it to salads and smoothies.

In one animal study, cilantro was shown to be effective for lowering blood sugar, leading researchers to suggest cilantro can be used to help manage diabetes (5).

Given how damaging elevated levels of glucose in the body can be, everyone can benefit from keeping blood sugar levels balanced (6). It can also help you maintain consistent energy levels throughout the day.

Anxiety is a regrettably common issue that people struggle with. In fact, the National Institute of Mental Health estimates that over 18% of U.S adults battle with anxiety (7).

Cilantro may be a natural way to find relief. One study in mice, for example, found that a cilantro extract is just as effective as anti-anxiety drugs like diazepam for reducing anxiety (8).

Considering most anxiety drugs come with a hefty list of side effects, cilantro may be an interesting alternative to consider with your doctor.

Chances are you’ve experienced food poisoning at some point in your life. The infamous nausea, muscle aches, cold-sweats, and headaches you get several hours after a questionable meal can make you miserable to say the least.

But evidence suggests you can reduce your chances of getting food poisoning by consuming cilantro with a meal.

A study published in the International Journal of Food Microbiology found that cilantro is particularly protective against listeria—a bacteria that often causes what we know as food poisoning (9).

Diseases of the brain such as Alzheimer’s or Parkinson’s are thought to be associated with two things: chronic inflammation and oxidative damage (10).

Amazingly, evidence suggests that cilantro can protect your brain from both.

First, it contains many antioxidants—including vitamins and the flavonoid quercetin—that are protective against oxidative stress (11).

7. Supports Vision with Vitamin A

If you don’t usually eat foods such as carrots or sweet potatoes that contain high amounts of vitamin A, your body may not be getting enough.

The problem is, your body needs vitamin A for a healthy immune system, eyes, skin, and mucous membranes. You really don’t want any of these things functioning at a suboptimal level due to a simple deficiency.

That’s why it’s a good idea to add foods to your diet that contain vitamin A. Cilantro is one of these foods. In fact, just a ¼ cup (enough for a garnish) can provide 270 IU of this essential nutrient to help keep your eyes sharp.

Don’t Like Cilantro? You Can Still Get Its Benefits

Cilantro is an herb that you either like or loathe. Somewhere between 4 and 14 percent of the population thinks cilantro tastes like soap.

These people aren’t just being picky. Your genetic makeup can determine whether you find cilantro distasteful.

But cilantro has too many benefits to ignore. It’s a rich source of phytochemicals, antioxidants, and several nutrients such as vitamin A. As a result, it can provide a significant boost to your health.

If you want to still take advantage of cilantro’s benefits without having to taste it, you can add it in a green juice that has other delicious flavors.

Organic green juices contain a variety of superfoods all in a convenient powder that you can mix into smoothies, breakfast bowls, or just plain water. This way you avoid the hassle of prepping every ingredient, while still reaping all the health benefits.