5 Food Additives that Destroy Your Gut 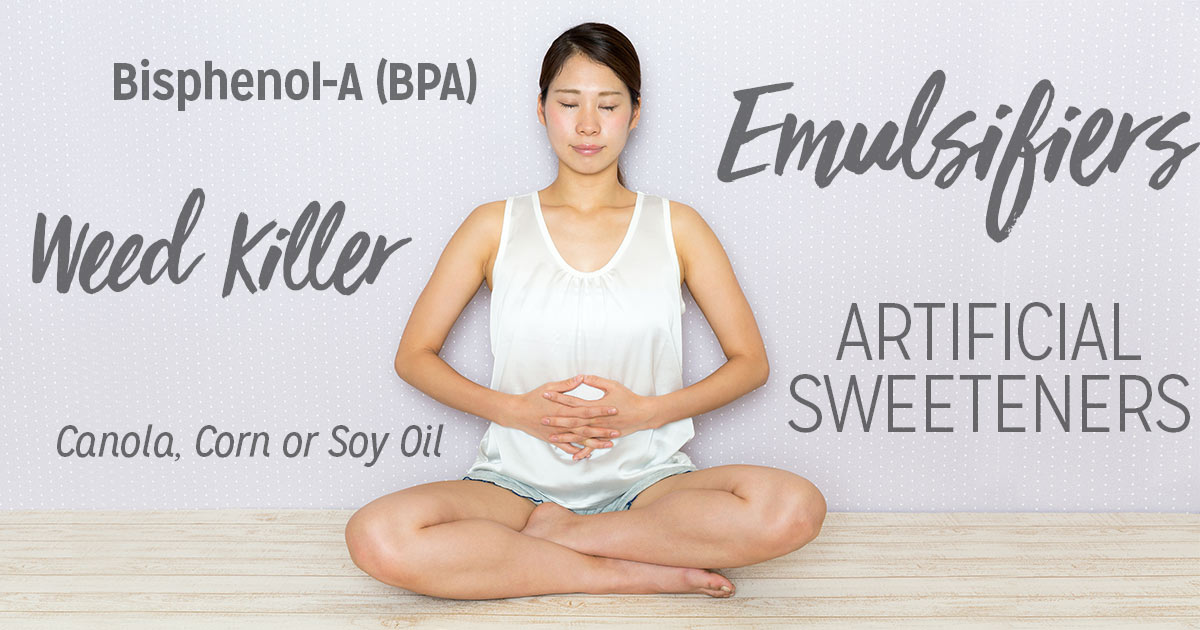 Countless food and beverages at the grocery store contain a long list of ingredients. Many of which you would need an advanced degree in chemistry to know what they are. While some of these additives are safe, others can cause serious harm to your gut health. Toxic or chemical food additives can disrupt gut function, leading to a host of digestive issues, chronic fatigue, and even weight gain.

Since your gut plays such a significant role in your well-being, it’s important to avoid the worst food additives if possible. Even seemingly healthy foods can be rendered unhealthy with the wrong additives. Here are 5 common food additives that can damage your gut function.

You’ll find these oils in processed foods, salad dressings, and most fried fast food. Consuming these rancid oils can trigger rampant inflammation in the body, especially in the gut.

Over time, this inflammation can compromise the lining of your intestines and allow partially digested food particles to pass into your bloodstream—this is called leaky gut syndrome (2).

Emulsifiers are additives used to stabilize and modify the texture of food. Think of how oil and water separate in a salad dressing. Emulsifiers help ensure that the oil and water do not separate while a product sits on the shelf.

While emulsifiers can make processed foods more enjoyable, they can cause damage to your gut. One study found that consuming emulsifiers dramatically altered the gut microbiome (5). These changes in gut bacteria triggered inflammation in the intestines. Animal studies also discovered that emulsifiers kill off beneficial bacteria which can result in weight gain and inflammation (6).

To avoid emulsifiers, scan the ingredients label for additives such as polysorbate 80 and soy lecithin. Carrageenan and cellulose gum are also often used as emulsifiers. They’re commonly found in creamers, coconut milk, sauces and salad dressing.

Artificial sweeteners are popular in sugar-free foods because they contain zero calories, so people assume they are a healthier option. You can thank the food industry for this misconception. In reality, artificial sweeteners come with a hidden cost.

Human studies echoed these findings, suggesting that consuming artificial sweeteners can promote blood sugar problems and obesity by altering the bacteria in the gut (8, 9).

Even though you will not find BPA printed on any ingredient labels, it’s a common toxin in many foods and beverages. It’s an unlisted additive in foods packaged in plastic, or cans with a plastic liner, or beverages in plastic bottles.

BPA residues happen when the plastic packaging that is in contact with the food leaches into the food. Under high temperatures, much more of the harmful compound is released (10).

Animal studies have found that BPA can promote the growth of unhealthy bacteria in the gut that are associated with obesity (11). Research has also found that BPA is a risk factor for inflammatory bowel disease (12).

With the recent surge of studies linking BPA to hormone disruption and digestive harm, many manufacturers have stopped using it. Chances are you have seen labels on plastic bottles or cans that advertise their products as “BPA-free.”

While it’s a step in the right direction, in most cases, it simply means manufacturers have swapped out BPA for another toxic alternative such as BPS or BPF. There’s evidence that these two chemical substitutes can harm enzymes that help you digest your food (13).

While it may not be an intentional additive, most non-organic foods are contaminated with toxic pesticides and herbicides. Media outlets will try to convince you these contaminants are not a concern because they are only found in trace amounts within food. But this couldn’t be further from the truth.

Quaker Oatmeal Squares Honey Nut cereal, for example, was found to contain 2,837 ppb (parts per billion) of an herbicide called glyphosate. This contamination level is far above the 160 ppb threshold that is considered safe by the Environmental Work Group (14).  Another study by the Canadian Food Inspection Agency found that glyphosate was present in 30% of all food they sampled (15).

Protecting Yourself from Toxic Additives

Toxic additives lurk in many foods and beverages. Some you can find by looking at the label, while others may not be listed in the ingredients at all. Big Food companies will certainly not tell you the truth, so it’s ultimately up to you to protect your own health.

Some of the best ways to avoid gut-damaging additives are to minimize your exposure to processed foods, and opt for organic when possible. Not only are organic foods higher in beneficial nutrients, they also do not allow the use of toxic weed killers or questionable additives. So, it’s no surprise that eating organic is linked to a lower risk of cancer.

By taking care of your body and what you put in it, you’ll support the health of your gut, which will have a positive impact on your physical and mental well-being. Avoiding these toxic food additives is a great way to start feeling your best.