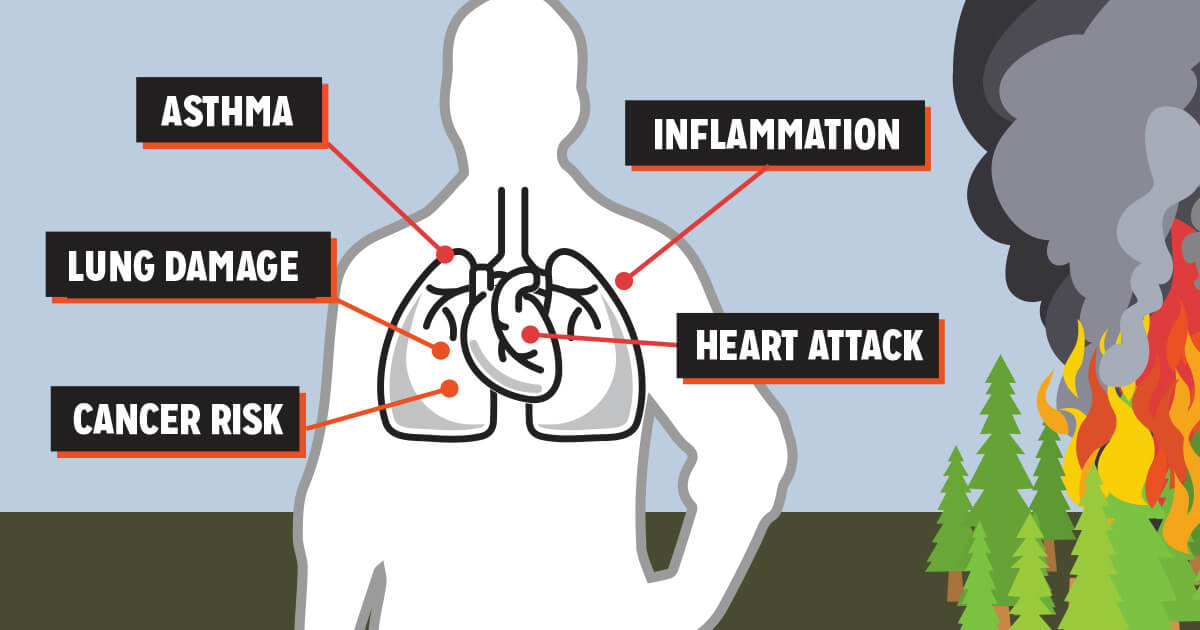 Wildfires are becoming an increasingly common problem. With a greater number of extended droughts, wildfires have become more frequent and more intense (1). Aside from the devastation in the areas where they burn, wildfires produce a lot of toxic smoke, which affects millions of people—even those living far from the fires.

How far you might be wondering? In 2018 for example, smoke from Western wildfires traveled over 3,000 miles to affect air quality on the East Coast (2).

Scientists have discovered that what’s inside this smoke can take a serious toll on your health—even if you’re hundreds of miles away from the fire.

But just how bad can it be? Take a look for yourself…

Researchers have discovered that wildfire smoke contains a high amount of the smallest type of particulate matter called PM1, said to be one of the deadliest forms of air pollution (3).

Since the particulates are so small (a millionth of a meter), their microscopic size makes it possible for them to get from your lungs into your bloodstream, where they can trigger an inflammatory response in the body (4).

In the short term, inflammation can show up as fatigue, allergies, anxiety, and skin problems. Over time, chronic inflammation can increase the risk of a variety of diseases, so it’s worth eating more anti-inflammatory foods.

Wildfire smoke is a mixture of carbon monoxide, alkaline ash, volatile organic carbon and particulate matter. While breathing these substances is harmful, for those with asthma it can be life-threatening.

The smoke from wildfires can trigger inflammation in the airways, and for someone with asthma, that can lead to more asthmatic events. Asthmatic episodes can also be more severe due to the particulate matter in smoke (5).

Because particulate matter can stay in the atmosphere even after the visible smoke has cleared, the danger can linger. So, it may be better to stay indoors for awhile with a quality indoor air filter to protect your family (6).

Even if you don’t have asthma, just a short exposure to wildfire smoke can irritate your respiratory system. This may show up in the form of chest pain, wheezing, coughing, sinus pain, and difficulty breathing.

During the 2007 California wildfires, researchers noticed surges in the volume of emergency hospital visits for respiratory illness treatment (7).

But there are also long-term consequences. A systematic review of over 60 studies found that wildfire smoke can increase the risk of respiratory disease (9). The risk is even higher for children and people over 65.

One of the most concerning effects of wildfire smoke is how it affects the cardiovascular system, and can increase the risk of having a heart attack.

Since the pollutants in wildfire smoke are so small, they can reach receptors in the lungs that ultimately trigger an increase in your heart rate and blood pressure (10).

This would explain why hospitals often experience a spike in emergency room visits for heart attacks, strokes, and irregular heartbeats during wildfires (11).

For those who already have an underlying cardiovascular disease, the extra stress and strain of wildfire smoke is an added risk for heart attack or stroke.

While few studies have investigated the specific effects of wildfire smoke on cancer, a lot of research has been done on air pollution and cancer risk.

Wildfire smoke contains a lot of particulate matter (PM), which is recognized as an air pollutant. In fact, wildfires contribute 40% of all PM in the country, making it a major source of air pollution (12).

But that’s not all. When houses are destroyed in a wildfire, the smoke becomes much worse. That’s because common household materials like plastic, foam, paint, fire retardant, and electronics all release carcinogenic compounds when they are burned, and they become part of the smoke.

How to Stay Healthy When It’s Smoky

The good news is, you can minimize the damage caused by wildfire smoke. If you live in areas affected by wildfires you can monitor the Air Quality Index. If it’s high, limit your time outdoors even if the air outside looks clear.

When you are indoors, close windows and doors and use an indoor air filter that has particle removal to help protect you from unseen pollutants. It’s also suggested to avoid vacuuming since it can stir up particles inside your home.

And don’t rely on dust masks for protection as they are only designed to stop large particles from passing through. The small particles in wildfire smoke simply pass through the mask. You would need a particulate mask, also known as N-95 or P-100 respirators to block out harmful air.

But if you live in an area that’s prone to wildfires, exposure is unavoidable. That’s why you should also protect your health by eating anti-inflammatory foods and detoxify your body with zeolite.

Since wildfire smoke has a broad array of pollutants, including toxic heavy metals, removing them with a zeolite detox can help your body bounce back.

Given the rise in the number and intensity of wildfires, the smoke can negatively impact your health with dangers that include an increased risk of heart disease and cancer. If you live in an area that’s affected by wildfire smoke, take steps to protect your health. Your future self will thank you for it.