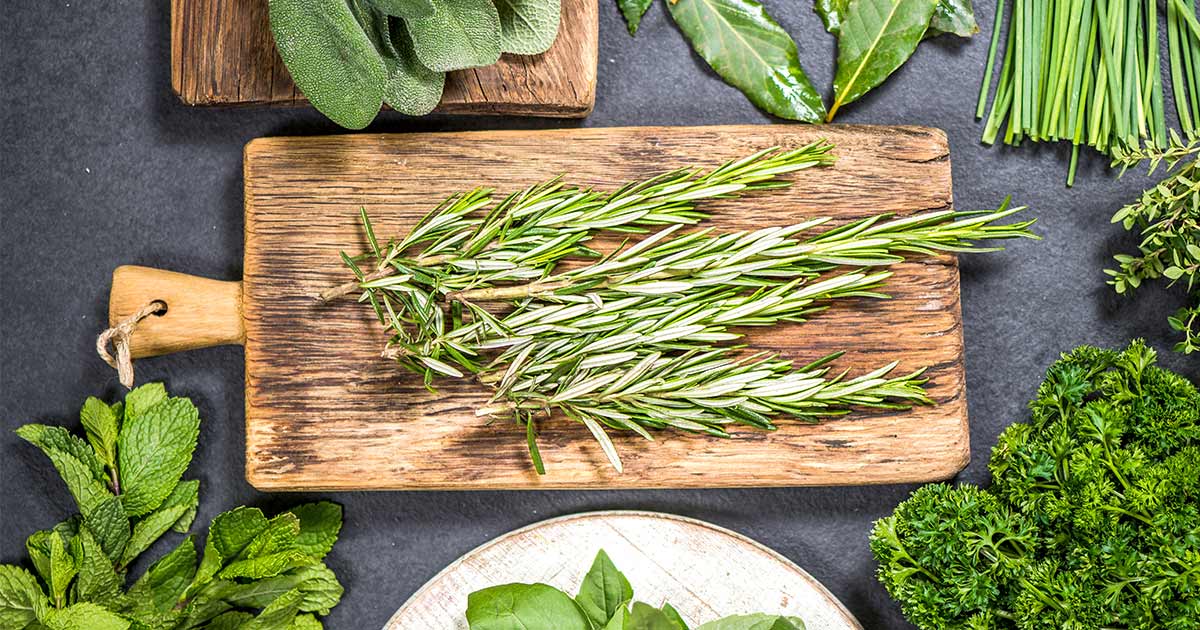 Antioxidants are disease-fighting gladiators that work around the clock to protect your health. More specifically, they protect your body from free radicals, little molecules that cause damage to healthy cells and even your DNA over time. Antioxidants are special compounds that can help you live a long and healthy life.

Scientists believe free radical damage plays a role in the development of many diseases including cancer, cardiovascular disease, diabetes, Alzheimer’s and more (1). This means antioxidants have an important role in your health.

The problem is, your body is constantly exposed to pesticides, heavy metals in drinking water, air pollutants and countless other toxins. All of which produce excess free radicals in the body. The more free radicals, the more antioxidants you need to protect yourself.

The best source for antioxidants is organic herbs, fruits and veggies. Herbs are some of the most powerful antioxidants. Here we have the 12 top antioxidant herbs ranked by ORAC scores (oxygen radical absorbance capacity), a system developed by the National Institutes of Health to show how well a fruit, veggie or herb disables a free radical.

Sprinkle these herbs on your favorite dishes for added flavor, or add to salads and smoothies for an extra superfood boost. All values based on 100g serving, ORAC values from Superfoodly.com

Sumac bran is an herb that’s incredibly rich in antioxidants. In fact, it has significantly more antioxidants than other antioxidant superstars like goji berries or acai berries. It simply doesn’t get the attention it deserves. And no, this isn’t the stuff in your backyard that gives you a rash. Sumac bran is a popular spice used in Middle Eastern cuisine due to its tangy, lemon-like flavor.

Clove is a common spice made from dried flower buds. They are prized for their one of a kind sweet and spicy flavors. But they’re more than just an aromatic spice. Studies have found that cloves can boost immune function, promote healthy digestion, and fight inflammation (2). Most of its benefits are due to a natural compound called eugenol, an antioxidant that’s 5 times more powerful than vitamin E (3).

Oregano is a popular herb used to flavor pasta sauces, pizza, roasted vegetables, and countless other dishes. A considerable amount of evidence also suggests that oregano has potent anti-microbial and anti-inflammatory benefits making the herb a great way to enhance your cooking while boosting your health at the same time (4).

Rosemary is a fragrant evergreen herb often used in Mediterranean cuisine. In addition to its aromatic flavor, rosemary is loaded with antioxidants. Studies have found that rosemary contains several antioxidant compounds including carnosol, carnosic acid, ursolic acid, and rosmarinic acid (5). All of which add up to an impressive ORAC score.

Cinnamon is a spice that transcends cultural norms when it comes to cuisine. You can find it in all types of food around the world ranging from apple pie to aromatic basmati rice. Most of cinnamon’s antioxidant activity comes from an active compound called cinnamaldehyde (6). This compound, among others, is the secret sauce behind cinnamon’s ability to support healthy blood sugar levels and blood pressure (7).

Turmeric, without a doubt, stands as one of the most beneficial natural substances on the planet. High quality, organic turmeric is rich in a compound called curcumin. Curcumin is a powerful antioxidant that also boasts a long list of health benefits. But it’s best known for its anti-inflammatory properties (8). Add this golden spice to rice dishes, or mix into a superfood smoothie (see recipe) to help fight temporary inflammation following a tough workout.

If you’ve ever had real vanilla bean, you know it has a divine flavor. But did you know that it’s also rich in antioxidants? Vanilla bean contains compounds like 4-hydroxybenzyl alcohol and 4-hydroxy-3-methoxybenzyl alcohol. Yeah, they’re a mouthful. But all you need to know is that they’re exceptionally potent antioxidants (9).

Cumin is an aromatic spice made from the powdered seeds of the cumin plant. You may know it from Mexican or Middle Eastern recipes. Most of cumin’s antioxidant activity comes from three compounds called gallic acid, quercetin, and kaempferol (10). Cumin’s warm, earthy flavors especially come to life in curries and stews.

Parsley is becoming an increasingly popular herb for both its bright flavor and health benefits when juiced. Like most of the herbs mentioned here, many of the benefits of parsley are due to its antioxidant effects. One study by the Institute of Food Safety and Toxicology, for example, found that adults who consumed parsley had significant reductions of oxidative stress in the body, showing it works well as an antioxidant (11).

Basil is a popular herb with a fragrant flavor that brings pesto to life. It contains two water-soluble flavonoid antioxidants called orientin and viceninare. In addition to their ability to protect your body from free radicals, they have anti-aging, anti-inflammatory, and antibacterial properties (12). Basil is a perfect companion to tomato dishes (pasta or pizza) and even complements fresh fruits such as watermelon for a healthy treat.

Ginger is a popular root herb that’s often used to calm an upset stomach or nausea (13). But the benefits go well beyond digestive health. Ginger contains a beneficial phytochemical called gingerol which exerts a wide range of beneficial effects including its anti-inflammatory and antioxidant effects (14). Consider adding ginger to stir fry recipes, marinades, or salad dressings to take advantage of its sweet spicy flavor and antioxidant content.

Thyme is another culinary herb that possesses an impressive set of benefits, including its anti-microbial ability which may protect against food-borne bacteria and illness (15). It’s also a delicious addition to most savory dishes, providing depth of flavor to stews, soups and more.

Eating foods or herbs that are high in antioxidants is essential to maintaining a healthy body. That’s because antioxidants help protect your body from free radical damage triggered by stress and environmental toxins. Add these antioxidant-rich herbs into your cooking or daily routine to give your body the tasty tools it needs to sustain a long and healthy life.