How Energy Drinks are Destroying Your Health 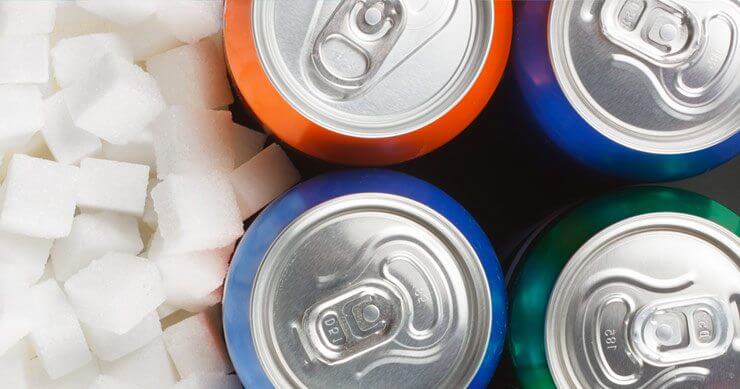 The point is, an overwhelming number of people struggle with fatigue and are looking for easy ways to boost their energy.

Even though energy drinks provide a quick fix for energy and productivity, they also come with some serious health risks such as diabetes, cancer, insomnia, and heart disease. Researchers have found that consuming just one energy drink can lead to diminished blood vessel function.

In this post, we’ll show you why you might want to reconsider buying your next energy drink along with some healthy and effective ways to boost your energy. That way, you can stay energized without compromising your health.

One of the biggest problems with energy drinks is their high sugar content. Many energy drinks contain as much as 50 or more grams of processed sugar. That’s more than 12 teaspoons of added sugar in one drink!

To put this into perspective, the American Heart Association recommends the daily limit of added sugar should be no more than 36 grams for men and 24 grams for women.

That means just by consuming one energy drink, you’ve already reached or exceeded your daily limit of added sugar. And since sugar is stuffed into so many different foods and drinks, it’s really easy to double or even triple the recommended daily limit of sugar.

Sugar is a Massive Health Concern

Eating too much processed sugar on a regular basis is arguably one of the top contributors to modern disease.

Sugar can overload and damage your liver.
Sugar is composed of two molecules: glucose and fructose. Glucose can be used by every cell in the body. Fructose, on the other hand, gets transported to your liver. So when you eat foods high in sugar or fructose (even worse), it severely taxes the liver, leading to potential damage. That’s what makes high fructose corn syrup so unhealthy.

Sugar causes weight gain and overeating.
Sugar can cause significant weight gain in several ways. If you’re not an active athlete, your liver is likely filled with something called glycogen (a form of stored energy). When the liver is maxed out on glycogen stores, which is the case with most people, fructose is turned into fat (another form of stored energy). Fructose can also turn off your body’s appetite-control system because it fails to stimulate insulin. Without insulin, the “hunger control hormone” called ghrelin, isn’t suppressed. The result is a lingering appetite.

Sugar increases risk of several diseases.
Your body metabolizes alcohol and sugar the same way. Too much alcohol and / or sugar can lead to insulin resistance, fatty liver disease, and dyslipidemia which is when there are abnormal fat levels in the blood.

Sugar can increase the risk of cancer and promote cancer metastasis (spreading).
When you put high amounts of sugar in your body, your pancreas releases a protein called s-catenin. S-catenin can cause your cells to replicate and make your cells become “immortal.” These “immortal” cells are what create pre-cancerous cells.

The list goes on and on. But the main point here is to convince you sugar is a real health concern. If you want to feel healthier and avoid disease down the road, do yourself a favor and reduce your sugar intake. A great first step is to avoid energy drinks altogether.

Another issue with energy drinks is they contain high levels of caffeine. Energy drinks can contain upwards of 500 mg of caffeine—which equals out to about 4-5 cups of coffee.

And to make matters worse, a consumer report discovered that many energy drinks don’t disclose the true amount of caffeine in their products. Some brands were found to have up to 20% more caffeine than what their labels claimed.

With inconsistent labeling like this, it would be easy to reach or exceed the recommended daily limit of caffeine without being aware of it.

Mayo Clinic advises adults should not exceed 400 (mg) of caffeine per day. While small amounts of caffeine are perfectly fine, larger doses can cause:

Caffeine and Your Hormones

According to multiple studies, caffeine not only increases insulin levels, it can also decrease insulin sensitivity. This means caffeine can cause sugar to stay in the bloodstream longer than it should. As a result, it puts a bigger strain on the pancreas. While this may not be an issue for healthy people, it can be a problem for diabetics and pre-diabetics.

Typically, cortisol is released during times of stress. It’s designed to prepare the body for fight or flight. But cortisol is also secreted when you drink caffeinated substances.

So if you drink 1-2 caffeinated energy drinks per day and are chronically stressed, cortisol will be pumping through your body on a regular basis. These high amounts of cortisol can cause:

Not only are energy drinks a hazard to your health, they also can be addicting. The combination of sugar and caffeine are responsible for their highly addictive nature.

Sugar (or fructose to be specific) can stimulate the brain’s hedonic pathway in the same way that alcohol does. In other words, sugar is addictive and can cause you to become dependent on it. Some studies have even suggested that sugar is more addictive than drugs such as cocaine!

And when caffeine is added to the mix, it becomes that much more addicting.

Like many other drugs, caffeine is chemically addictive. And unlike coffee, where the caffeine is naturally occurring and comes with antioxidants, the caffeine added to energy drinks is usually synthetic, with zero health benefits.

Caffeine blocks something called adenosine receptors in your brain. When the adenosine receptors are blocked, it allows the brain’s own natural stimulants, such as dopamine, to work more effectively. The result is the energy high you feel from caffeine.

But when people consume high amounts of caffeine on a regular basis, it alters the brain’s chemistry and physical characteristics over time. Specifically, it causes the brain to develop more adenosine receptors. It’s the body’s way of adapting, or maintaining equilibrium.

When there’s more adenosine receptors, it takes more caffeine to get the same effect. This makes caffeine an addictive substance. And it also explains why suddenly giving up caffeine can trigger a range of withdrawal effects.

The point is, both caffeine and sugar are addictive in their own right, but when combined, they can cause you to become heavily addicted.

In many cases, this leads to the habit of drinking 2+ energy drinks per day. And over time, they begin to lose their effect which then requires more to get the same energy high. This is when you can start to see a lot of the health problems associated with energy drinks.

Finding an Alternative to Your Energy Drink

If you frequently experience fatigue, it may be wise to consult a naturopathic doctor or MD. They can often help you determine the root cause of your fatigue (if there is one). Some common causes of chronic fatigue include:

While you work on finding any potential culprits to your fatigue, there are other things you can do to boost your energy levels in the meantime.

Adaptogens are herbs which help the body adapt to stress and normalize any related organs or hormones. Since stress and anxiety can cause fatigue, adaptogens can help provide sustained energy throughout the day.

One adaptogen called Rhodiola rosea, for example, has been found to significantly enhance physical energy and mental performance. The Russian military even used rhodiola to help soldiers endure long nights in extreme conditions.

At Touchstone Essentials, we also create an energy supplement called Green Energy. This supplement can help you kick your energy drink habit by providing sustained energy throughout the day. And it only contains around 2 mg of caffeine per serving.

These substances work together to give you sustained energy throughout the day. Because it doesn’t have stimulants you can take it day or evening, and still sleep soundly.

Only recently have scientists begun to understand the extent of gut bacteria’s role in human health and disease. Among many other things, a healthy balance of bacteria in your gut is required for digestion, fighting off infections, and a healthy metabolism.

It’s thought that up to 80% of your immune system resides in the gut. So it’s no surprise when recent evidence suggests those who have reduced gut bacteria diversity are more likely to be fatigued or experience chronic fatigue syndrome.

Between the pesticides on our food and the over prescription of antibiotics, we need to restore the healthy bacteria in our gut more than ever.

It’s a good idea to get probiotics into your diet and eat fermented foods on a regular basis. If you’re not sure where to start, consider kombucha, sauerkraut, kefir, or non-GMO miso.

Don’t underestimate the power of sunshine to ward off fatigue. Getting exposure to sunlight is essential to provide your body with the vitamin D it needs. If you don’t get enough sunshine or vitamin D, it can make you feel tired and groggy throughout the day.

That being said, if you can’t get regular exposure to the sun (at least 10 minutes a day) the second-best option is to get a safe vitamin D supplement. During November to March, supplementing is the only way to get the vitamin D you need.

Multiple studies suggest that people who are deficient in vitamin D experience significantly less fatigue after they are treated with a vitamin D supplement.

The next time you’re feeling groggy, try to take a 5-10 minute walk during your break or try our tomato-timer method if your job involves a lot of sitting:

Set a timer for 25 minutes (you can use this online timer). Once the time is up, take a 5-minute break to walk around, do some burpees, or even jumping jacks. After the 5-minute break, start the timer again and resume working. This method fights off the mid-day grogginess and keeps the blood flowing.

Energy drinks wreak havoc on the body and mind. They can potentially cause a range of health issues including osteoporosis, obesity, liver damage, and even cancer.

To make matters worse, they are extremely addictive and lose their effect over time. As a result, it’s easy to get sucked into the habit of drinking 2-3 energy drinks per day. Talk to your doctor to see if there are any underlying reasons for your fatigue. Most importantly, consider exploring alternative ways to boost your energy naturally.