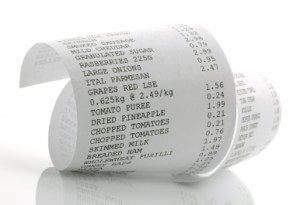 Products labeled “BPA free” may be just as toxic as those made with the increasingly shunned original chemical, according to a study conducted by researchers from the University of Texas and published in the journal Environmental Health Perspectives. BPA (bisphenol A) is an industrial chemical that has been widely used since the 1950s in a large variety of products, from polycarbonate plastics (like those used to make water and baby bottles) and the resins used to line food and beverage containers to compact discs and the thermal paper used to print receipts. A vast body of research has proven that BPA mimics estrogen in the body, and has linked it to a variety of health problems including cancer, reproductive and neurological defects, obesity and diabetes.

Growing consumer concern over BPA has led many manufacturers to replace it with the related chemical BPS. However, the new study shows that BPS also functions as an estrogen mimic.

“I think we should all stop and be very cautious about just accepting [BPS] as a substitute for BPA,” lead author Cheryl S. Watson said. “We should question the whole process about how we introduce chemicals into the marketplace without properly testing them first.”

Researchers exposed cells from rats to BPS at levels comparable to those that people might be exposed to in daily life. They found that even at such low concentrations, BPS interfered with the cells’ response to natural estrogen hormones.

“People automatically think low doses do less than high doses,” Watson said. “But both natural hormones and unnatural ones like [BPS] can have effects at surprisingly low doses.”

“[The Texas study] is a great first research step on BPS and, in my opinion, should be sufficient to say this is an estrogen and we don’t want it in our bodies,” Vandenberg said.

In the rush to label products BPA free, BPS has already become nearly as prevalent in our environment as its predecessor chemical. A recent study conducted in eight different countries found that 81 percent of urine samples contained traces of BPS, nearly equivalent to 93 percent of U.S. urine samples that contain BPA.

“A lot of consumer products say BPA-free, but they don’t say BPS, a similar compound, replaced it,” Vandenberg said.

BPS critics point out that the chemical has already replaced BPA so thoroughly in some uses that in a study published last year, every thermal paper receipt tested had been made with BPS. Significantly, such paper is also used for printouts from ultrasounds and other medical devices.

“I think that might be the most scary use,” said John Warner, president of the Warner Babcock Institute for Green Chemistry. “Here you have pregnant women in these ultrasound and imagery rooms handling these printouts with BPS.”

Editor’s Note:
Studies suggest natural mineral zeolite can attract and help remove pollutants such as Bisphenol A (BPA) from the body. Working like a magnet, zeolite can attract toxins into and onto its crystalline structure, safely and gently removing them within hours.

To learn how zeolites work, read the article “The Three Ways Zeolites Take Out Toxins” and for more on how you can safely detox, read “Detoxing? Zeolite Clinoptilolite to the rescue.”