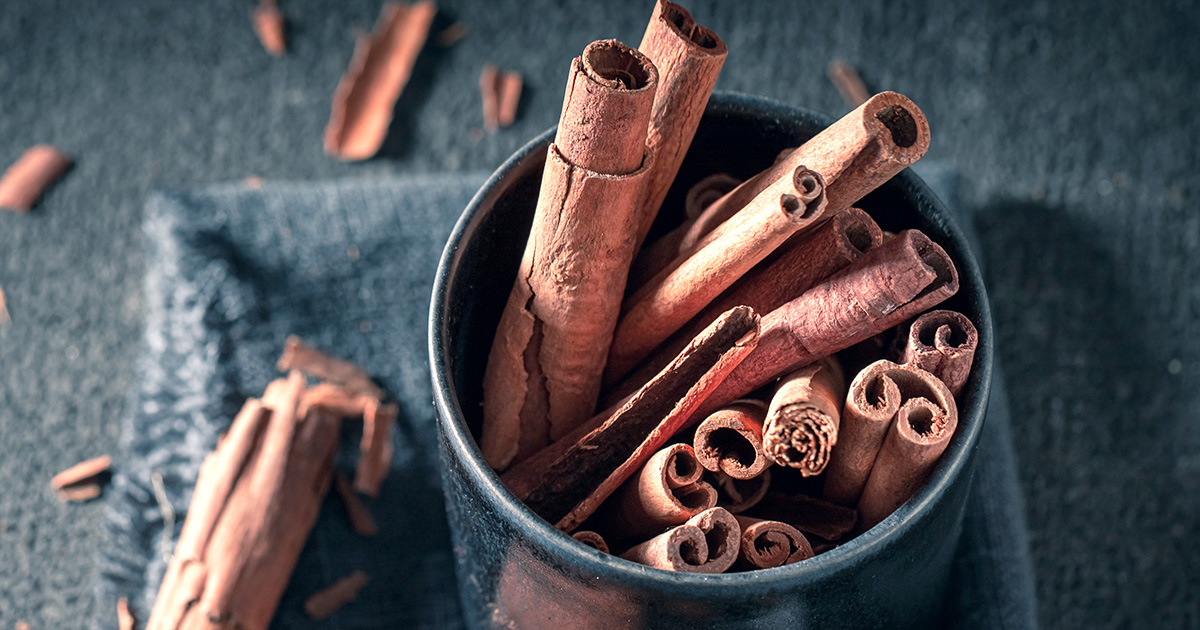 While refined carbs and sweet treats may be the ultimate comfort food, they come with a downside: high carbohydrate and sugar intake causes blood sugar levels to spike. Aside from weight gain, consistently high blood sugar can result in serious health issues including diabetes, inflammation, hormonal imbalances, and an increased risk of heart disease (1, 2).

The best way to avoid blood sugar spikes is to moderate your intake of refined carbs and add in some exercise daily. Easier said than done. Thankfully, nature has some natural remedies that can help regulate your body’s blood sugar levels as part of a healthy lifestyle.

With stable blood sugar levels, you may experience more consistent energy throughout the day, avoid blood sugar-related complications, and even find it easier to maintain a healthy weight. So, here are seven of nature’s best remedies for natural blood sugar control.

Ceylon cinnamon is a superstar when it comes to blood sugar control. Scientists have found that cinnamon can improve your body’s response to insulin—a hormone critical for blood sugar regulation (3).

If you’re taking high doses of cinnamon however, seek out Ceylon cinnamon since the type typically sold in supermarkets (Cassia) contains a compound called coumarin that can be toxic in large doses.

When your cells become less responsive to insulin, the insulin becomes less effective, which results in chronically high blood sugar levels. It’s believed this is the reason why low vitamin D levels are associated with developing type 2 diabetes (7). The good news is that getting enough vitamin D may help.

Vitamin D can interact with a region of your brain called the hypothalamus to improve blood sugar control and reduce insulin resistance (8). In one study, daily vitamin D supplementation was found to significantly improve both fasting blood sugar levels and A1C levels (9).

You may have never heard of it, yet gymnema is an herb that has been used in Ayurvedic medicine for thousands of years. In people with type 2 diabetes, gymnema has been shown to decrease fasting blood sugar by 11% and also decrease A1C levels (10).

Even if you don’t have type 2 diabetes, gymnema can have a huge effect on your blood sugar levels due to a unique effect: it can reduce your cravings for sweets by dampening the taste sensation for carbs and sugar (11). With fewer cravings, your sugar intake is more easily reduced.

Furthermore, animal studies suggest that gymnema can reduce how much sugar your gut absorbs, which decreases the amount of sugar that gets into your bloodstream (12).

American ginseng is a root-based herb well-known for its ability to stimulate the immune system and combat fatigue. But a growing body of evidence reveals that it may also support healthy blood sugar levels.

One study in particular even found that compared to placebo, American ginseng significantly reduced A1C and fasting blood glucose levels (14). It’s theorized that American ginseng has this blood sugar-lowering effect by improving your body’s response to insulin (15). At the same time, it also boosts the pancreas’s release of insulin.

Turmeric is one of the most popular herbs in the world. Thanks to powerful compounds known as curcuminoids, turmeric has a long list of health benefits.

One of these benefits is blood sugar control. One well-designed 9-month study of pre-diabetic people published in Diabetes Care, found that while 16% of the placebo group went on to develop diabetes, in the group that took turmeric extract not a single person developed diabetes (16).

Animal studies suggest the phytochemicals in turmeric (like curcumin) have this effect because they are shown to improve the body’s sensitivity to insulin (17). However, since this golden root is poorly absorbed, it’s best to consume turmeric with healthy fats to optimize absorption.

Aloe vera is an herbal succulent that is shown to have a powerful regulatory effect on blood glucose (sugar). One scientific review found that aloe vera supplementation decreased fasting blood sugar levels by 46.6 mg/dl and A1C by 1.05% (18).

While scientists still aren’t quite sure how aloe vera produces this effect, they believe it is partly due to its content of trace minerals like chromium, magnesium, manganese, and zinc. All of which are important compounds for helping your body metabolize (break down) the sugar in your blood.

Chromium is a trace mineral found naturally in many foods, and research shows it may enhance the action of insulin in the body (20, 21). However, eating a high-sugar diet may cause levels of this mineral to be depleted, so it’s important to make sure you’re getting enough.

Some of the best plant-based sources of chromium include broccoli, grapes, whole wheat and brewer’s yeast. Hands down, broccoli gets the health win since it has the highest levels of chromium and it’s rich in vitamin C, which boosts absorption of the chromium.

Given how pervasive sugar is in our food supply, our bodies are under constant stress to manage and maintain a healthy blood sugar level. A variety of natural remedies may help by improving the body’s insulin response, lowering fasting blood sugar levels, and supporting insulin production.

While everyone can benefit from healthier blood sugar levels, if you’re under a doctor’s care, check with them before you add herbal remedies so they can monitor your blood sugar to make sure it doesn’t drop too far, too fast.

Beyond blood sugar support, this collection of spices, herbs and superfoods comes with a long list of added benefits. These include extra antioxidant support, fighting the effects of inflammation, and strengthening the immune system, all of which are beneficial for your health.