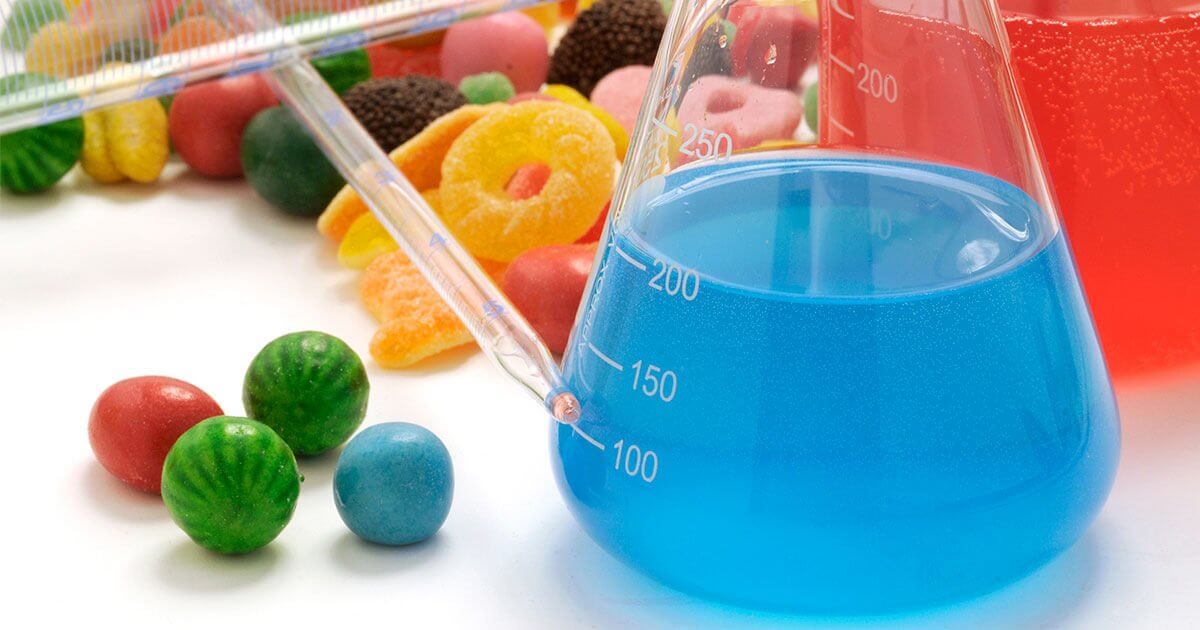 Artificial dyes are a common industry tactic to make food look more appealing. Kids will reach for rainbow-colored cereal over lackluster brown cereal any day. You may find yourself picking a jar of bright green pickles instead of a jar of dull, grayish ones. Food dyes are incredibly common.

Most of us consume food dyes without second guessing their safety or even realizing they’re there. However, artificial food dyes are a serious cause for concern because they can cause significant damage to our health.

So before you give your kids a snack or decide to splurge on a red velvet cupcake, consider this…

Some Food Dyes Are Carcinogens

According to several studies summarized by the Center for Science in the Public Interest (CSPI), the three most widely used dyes, Red 40, Yellow 5, and Yellow 6, are contaminated with known carcinogenic chemicals—meaning they can increase the risk of cancer.

The FDA has even acknowledged that Red 3, another artificial dye, is a carcinogen. Yet they still allow it to be in our food supply.

The dangers of Red 3 were identified way back in 1985. That’s when the acting commissioner of the FDA said that Red 3 “has clearly been shown to induce cancer” and is a “public health concern.”

Yellow 5 and Yellow 6 are also notoriously dangerous food dyes that are commonly used in foods. For example, the CSPI noted that 6 of 11 tests on Yellow 5 resulted in mutations, which is a sign Yellow 5 may be carcinogenic.

Artificial dyes are also thought to worsen behavioral problems and hyperactivity in children.

One study by the United Kingdom’s Food Standards Agency in 2007 found that when children consumed artificial food dyes and the common preservative sodium benzoate, they experienced a significant increase in hyperactive behavior.

In other words, the children who consumed food with dyes had a decreased ability to concentrate and may show more impulsive behavior.

The link between hyperactive behavior and artificial food dyes was so strong it led the European Union to require warnings on products containing those dyes. The warning must read: ‘may have an adverse effect on activity and attention in children.’

Rather than label foods with health warnings, many manufacturers in the UK and Europe switched over to natural dyes. This has created a scenario where the same company markets one candy in the UK with natural food dyes, and another version of the same candy in the US with artificial dyes.

All of this is even more concerning when you realize how easy it is to consume high levels of artificial dyes.

Between candy, cakes, and brightly colored drinks, the daily consumption of artificial food dye can easily exceed a worrisome 100 mg per day for a child. Behavioral effects have been noted in studies on children using only 26 mg of dyes.

If you still need another reason to steer clear of artificial dyes, consider this: Food dyes are added to processed foods to conceal their off-putting appearance.

When foods are ultra-processed, valuable nutrients, fiber, and disease-fighting phytochemicals are completely lost. They also lose their flavor and natural colors when processed.

We associate bright, deeply-hued colors with healthy foods such as fruits and veggies. So manufacturers add dyes to many foods to mimic the appearance of healthy foods, even though the processed food is anything but healthy.

The potential dangers of food dyes can’t be ignored. Artificial dyes add absolutely no benefit to food and come with risks that include an increased risk of cancer, hyperactive behavior in children, and even allergic reactions.

The three most commonly used dyes are Red 40, Yellow 5 and Yellow 6. To avoid artificial dyes, check the ingredient labels on all food and beverage products.

Want an automatic way to avoid artificial dyes? Buy organic. Food that is certified organic is free of artificial ingredients, including food dyes.